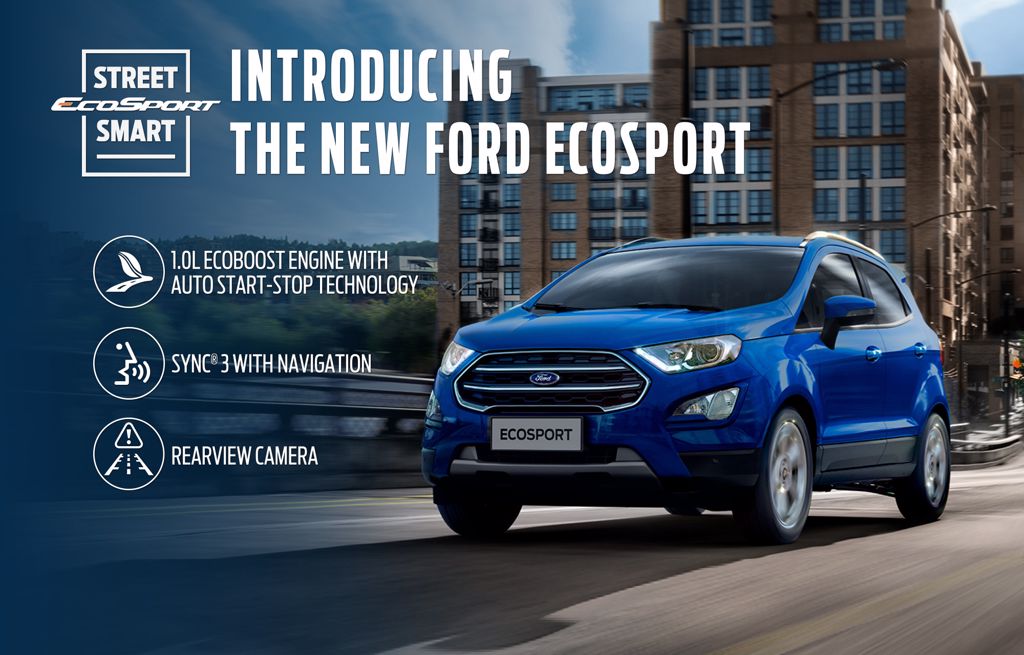 · The new EcoSport is street smart with a bolder look and design, refined interior, smart and safety features, and driver-assist technologies (DAT) including SYNC® 3 with Navigation and Rear View Camera with Rear Parking Assist

The new EcoSport features enhancements in both exterior and interior design, new and upgraded smart and safety features and driver-assist technologies (DAT), and improvements in driving performance and fuel efficiency powered by a 1.0L EcoBoost engine.

Since it was first launched in the Philippines in 2014, the EcoSport has become a familiar sight on city streets across the country, having gained wide appeal for its unmistakable combination of agility, affordability, and fuel efficiency of a compact car with the ground clearance, flexibility, and spaciousness of an SUV.

With the EcoSport, Ford pioneered the mini SUV segment and led it over the last four years, including a nearly 50 percent share in 2017.

“The Ford EcoSport is an SUV in a league of its own - combining quality design, rugged capability, best-in-class features, superior fuel economy, and great value for money, all into a single and fun vehicle,” shares Bert Lessard, managing director, Ford Philippines.

At the heart of the new EcoSport are two engine variants: the award-winning 1.0L EcoBoost and the new and more powerful 1.5L Twin Independent Variable Camshaft Timing (TiVCT) engine, producing 125 and 123 horsepower, respectively.

The new and more powerful 1.5L engine features TiVCT that helps improve efficiency. Together with the new 6-speed automatic transmission, this upgraded engine allows for smoother and faster acceleration.

Designed to suit urban traffic conditions, the new Ford EcoSport has a compact size yet trendy look, perfect for maneuvering in cities. It has a ground clearance of 209mm and its exterior features a refreshed grille, a new hood design, headlamps, and lightweight and extra durable 17-inch alloy wheels.

Meanwhile, its interior enhancements put driver and passenger comfort and convenience as top priority. The Titanium variant sports a more stylish design and features a leather dashboard, power sunroof, and an 8-inch multicolor touchscreen with a redesigned interface and intuitive smartphone-like actions. The Trend and Ambiente variants are equipped with a 9-inch touchscreen display.

The new EcoSport is also more adaptable than ever with added smart storage spaces. It can handle a load of up to 1,178 liters, with 25 smart storage compartments for coffee cups, smartphones, tablets, umbrellas, bottles and other accessories. Its trunk is spacious enough to accommodate luggage for out of town trips for city dwellers.

Smarter and more technologically-advanced than ever

The new EcoSport is equipped with multiple smart and DATs that make driving safer and more convenient. These include the Rear View Camera with Rear Parking Assist, Rain Sensing Wipers, Automatic Headlights, and Smart Keyless Entry.

The new EcoSport is also powered by SYNC® 3 with Navigation that allows drivers to keep their eyes on the road and hands on the wheel while staying connected. SYNC® 3 features voice control for the entertainment system and the driver’s calls and text messages. The AppLink 3.0 feature on SYNC® 3 also allows passengers to use their favorite smartphone applications via the car’s touchscreen. The new EcoSport also includes a 7-speaker audio system for the Titanium variant.

Aside from being smart, the new EcoSport also comes with a slew of safety features including

“The new EcoSport retains the strengths of its predecessor while introducing a number of new and exciting features. Its trendier design and sophisticated interior, smart technologies, and the addition of the EcoBoost engine will deliver a more enhanced driving experience. We are excited for Filipino customers to get their hands on the new EcoSport and see for themselves why it’s a street smart vehicle perfect for urban driving,” said Rodel Gallega, vice president, Marketing and Sales, Ford Philippines.

The new EcoSport will be available in four variants with the following price points:

Customers can test drive the new EcoSport from August 31 to September 2 at the Ford Island Conquest Year 2 happening at the Big Bear Oval in Bonifacio High Street, Bonifacio Global City.

View all the latest Promotions from Laus Ford Group (Pampanga)

View all the latest news from Laus Ford Group (Pampanga)